bollywoodenabler
I am a historian/historical reinactor. I used to work in a a living history museum--but now teach about all sorts of history. I have been entranced by India since I was a child--I had a penpal in Delhi for many years--until she got married!! I got introduced to Hindi film by my goddaughter, and was hooked. I wanted to know all that I could about Hindi cinema, so I began to read, collect books, and DVDs on Hindi cinema. I plan on putting together an introductory class on Hindi films--in the meantime, I just hook folks on Bollywood with music and movies! 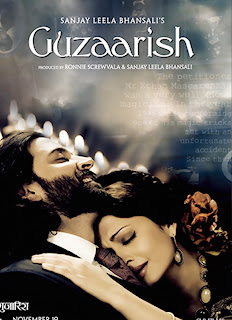 I went to see this fabulous movie yesterday. I not only brought an old(but young) friend that I have only recently discovered loves Bollywood--but I also gave a knitting buddy her first exposure to Bollywood on the Big Screen!!

This movie has a topic that is very relevant and timely--assisted suicide. You might not think that this would make for an uplifting movie, but it does. While the main character's, Ethan, body is slowing shutting down-he is trying to convince the government and those who love him that he wishes to die--and has come to terms with this.

We see, via flashbacks, the wonderful full life that Ethan has lead--he was a world renowned magician. During a performance, his equipment was sabotaged, and he was left a quadriplegic.

Even after he is incapacitated, he does not stop enjoying and living life--he writes a book about embracing life, even when give major obstacles. He hosts a radio show that plays music to encourage and uplift.

Yet, even with all his accomplishments, he cannot look past the fact that he is dying slowly--his kidneys have shut down, his lungs are slowly losing the ability to provide him breath--and his constant pain is something he tries to hide.

His caretaker, Sophia, with her elegance and formal manner, hides her love for her patient, as he hides his love for her.

Even with the somber topic, this movie is uplifting and wonderful.
The theatre was full, and usually when I go to Bollywood movies at this theatre, the Indian audience tends to cheer, laugh and yell at the screen--even serious movies. When I saw Kaminey, there was much talking and chatter during the film.
Well, during this film, there was silence during most of the movie--and toward the end, I swore I heard sobbing--or maybe that was me. Meeting folks in the lobby after, the majority of the movie goers seemed highly moved by this film.

I do think, that with this film, Bhansali has become one of my favorite directors. He makes you feel that you are in the shoes of those on the screen. His attention to detail and love of depth has you scanning the background looking for hints as to where he will be taking the viewer.

I encourage you all to see this film--if possible, on the big screen.
Posted by bollywoodenabler at 3:29 PM No comments: